General Appearance of the Alaskan Malamute

General Appearance of the Alaskan Malamute

The Alaskan Malamute, one of the oldest Arctic sledge dogs, is a powerful and substantially built dog with deep chest and strong, well-muscled body. The Malamute stands well over the pads, and this stance gives the appearance of much activity and a proud carriage, with head erect and eyes alert showing interest and curiosity.

The head is broad. Ears are triangular and erect when alerted. The muzzle is bulky, only slight diminishing in width from root to nose. The muzzle is not pointed or long, yet not stubby. The coat is thick with a coarse guard coat of sufficient length to protect a woolly undercoat. Malamutes are of various colors. Face markings are a distinguishing feature. These consist of a cap over the head, the face either all white or marked with a bar and/or a mask. The tail is well furred, carried over the back, and has the appearance of a waving plume. The Malamute must be a heavy boned dog with sound legs, good feet, deep chest and powerful shoulders, and have all of the other physical attributes necessary for the efficient performance of his job.

The gait must be steady, balanced, tireless and totally efficient. He is not intended as a racing sledge dog designed to compete in speed trials. The Malamute is structured for strength and endurance, and any characteristic of the individual specimen, including temperament, which interferes with the accomplishment of this purpose, is to be considered the most serious of faults. 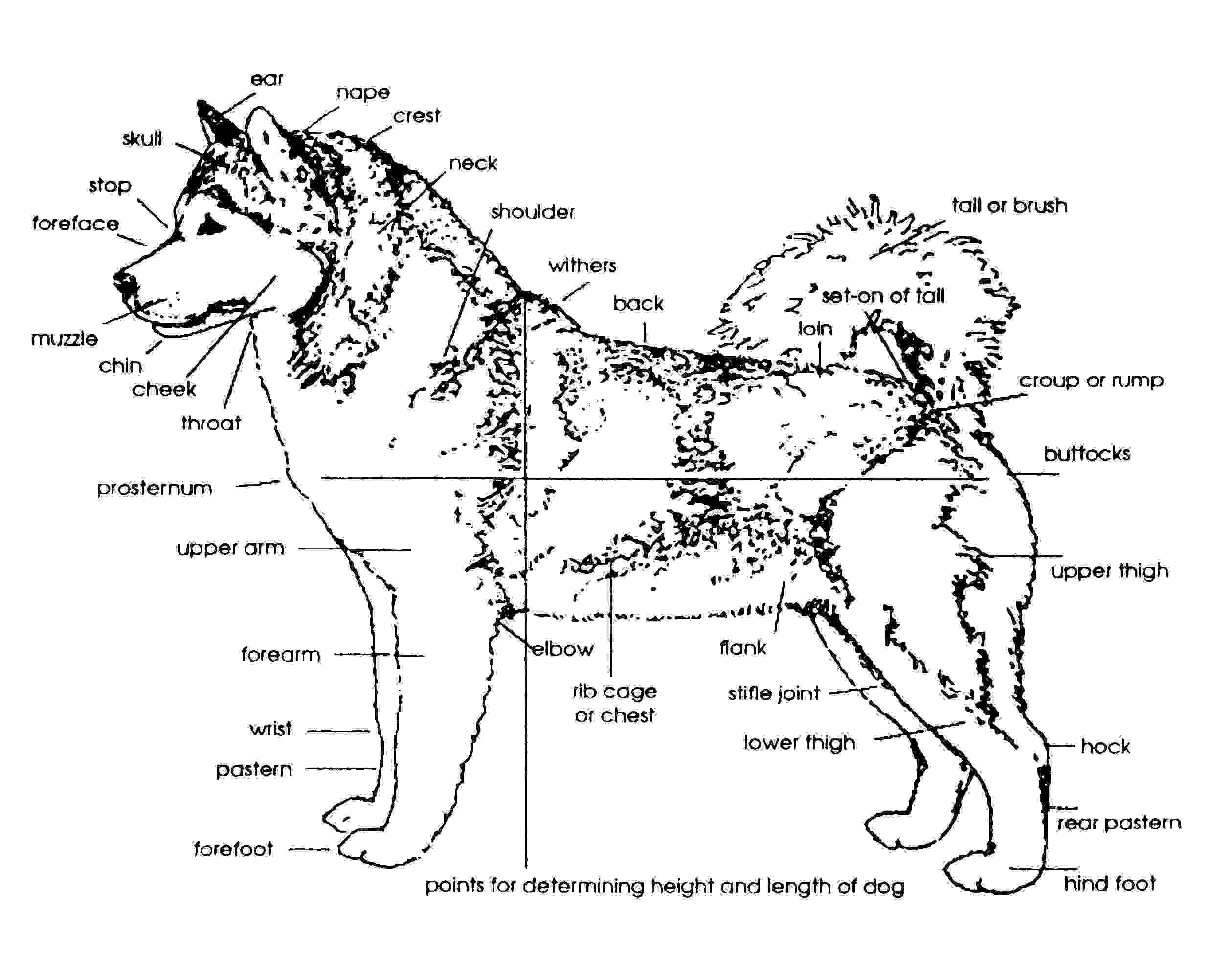 In judging Alaskan Malamutes their function as a sledge dog for heavy freighting in the Arctic must be given consideration above all else. The degree to which a dog is penalized should depend upon the extent to which the dog deviates from the description of the ideal Malamute and upon the extent to which the particular fault would actually affect the working ability of the dog. The legs of the Malamute must indicate unusual strength and tremendous propelling power. Any indication of unsoundness in legs and feet, front or rear, standing or moving, is to be considered a serious fault. Faults under this provision would be splay-footedness, cowhocks, bad pasterns, straight shoulders, lack of angulation, stilted gait (or any gait that isn’t balanced, strong and steady), ranginess, shallowness, ponderousness, lightness of bone and poor overall proportion.

Any discrepancy from the foregoing points should be considered a fault and the seriousness with which the fault should be regarded should be in exact proportion to its degree and its effect upon the health and welfare of the dog. 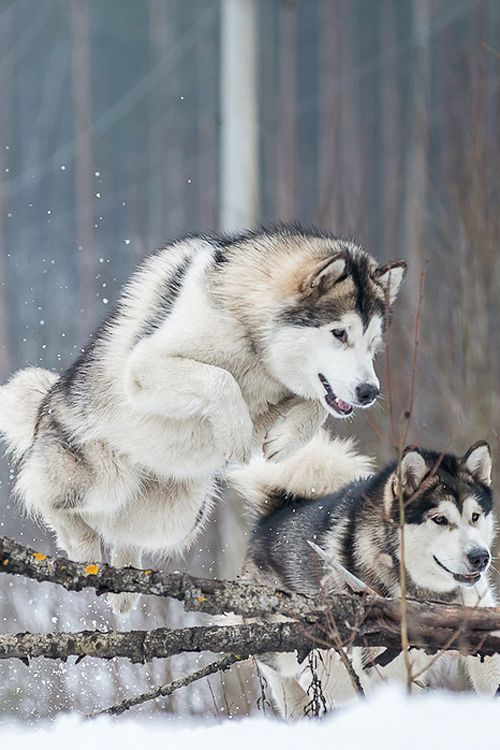 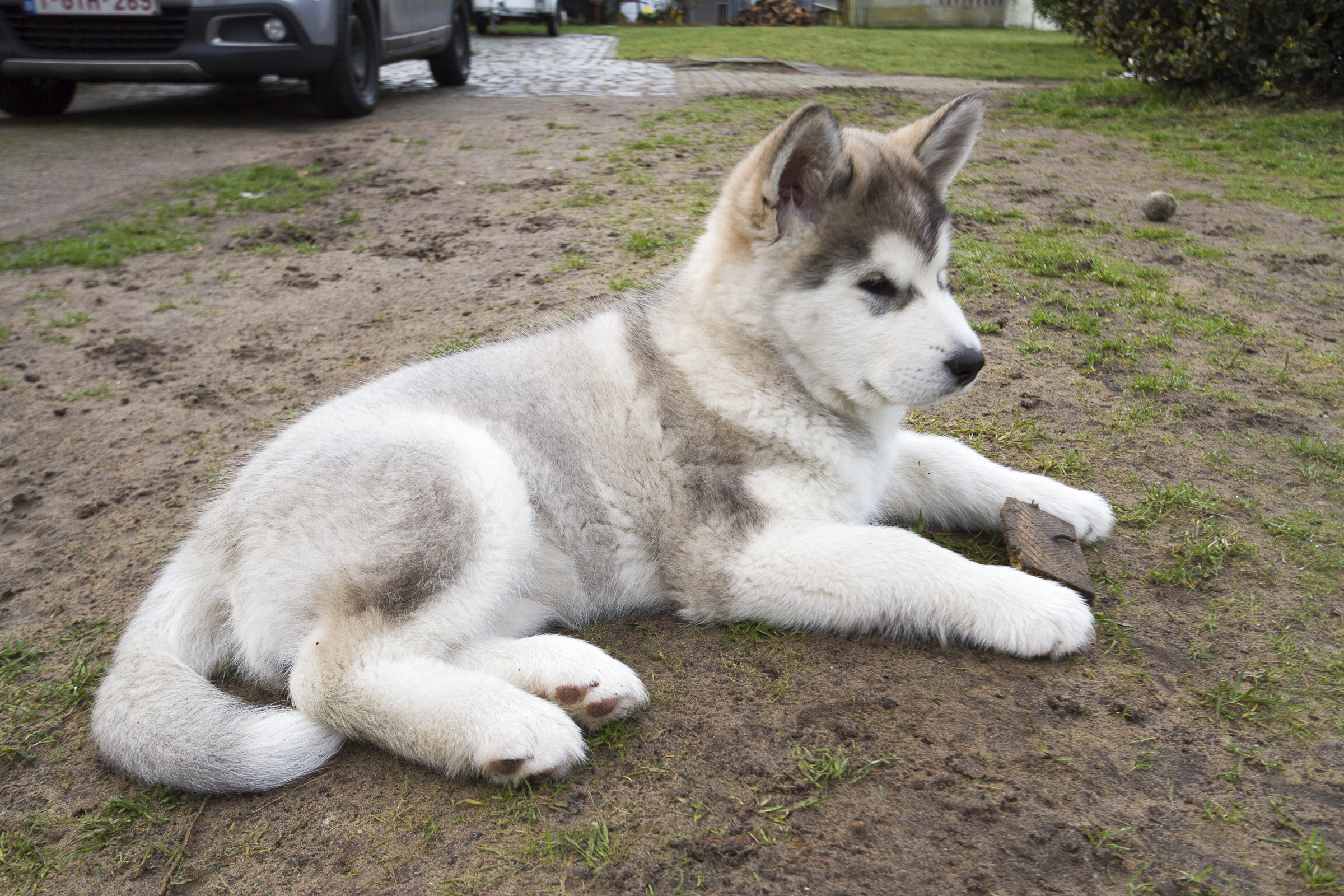 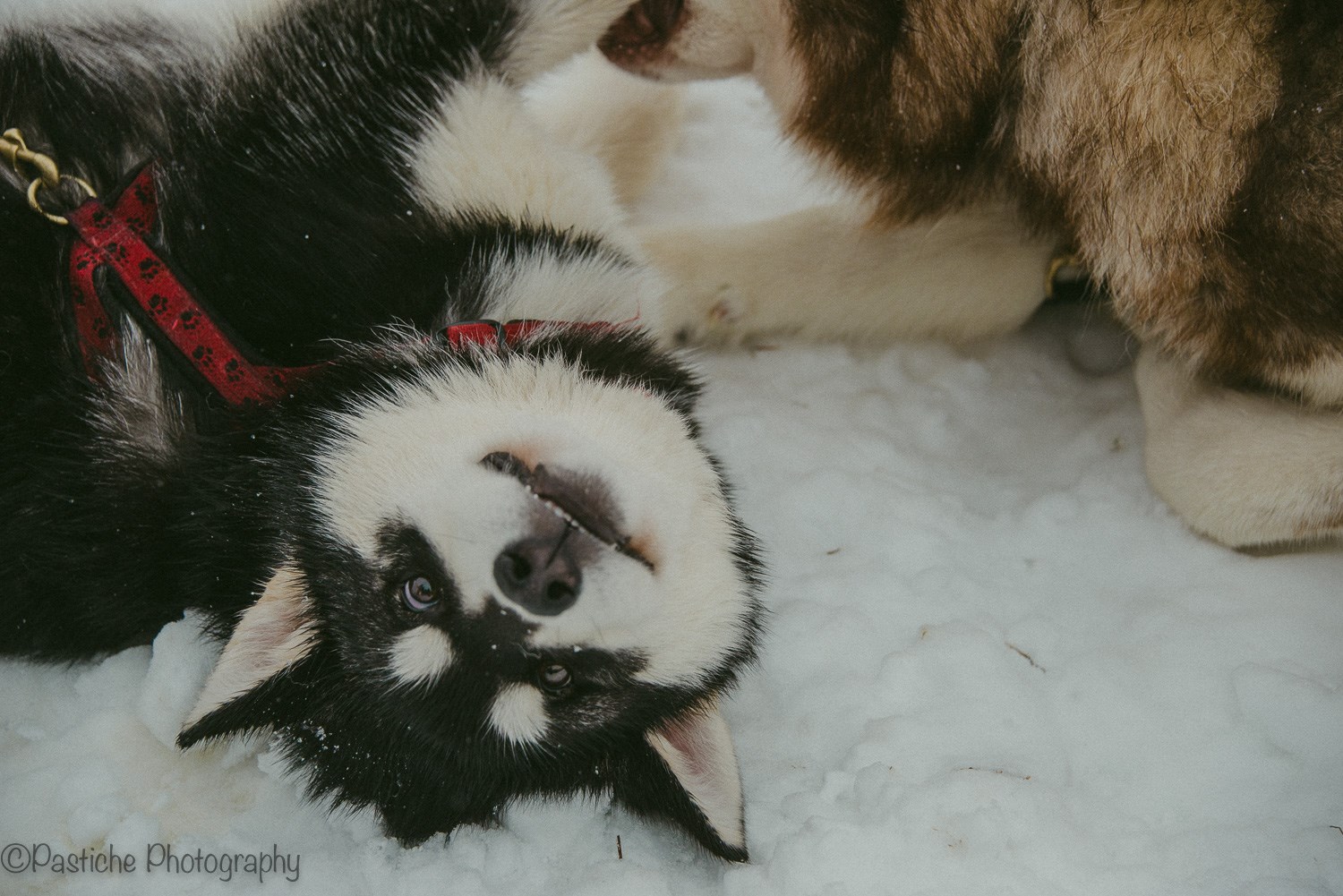 There is a natural range in size in the breed. The desirable freighting sizes are:

The head is broad and deep, not coarse or clumsy, but in proportion to the size of the dog. The expression is soft and indicates an affectionate disposition.

Obliquely placed in the skull. Eyes are brown, almond shaped and of medium size. Blue eyes are a disqualifying fault.

Of medium size, but small in proportion to the head. The ears are triangular in shape and slightly rounded at tips. They are set wide apart on the outside back edges of the skull on line with the upper corner of the eye, giving ears the appearance, when erect, of standing off from the skull. Erect ears point slightly forward, but when the dog is at work, the ears are sometimes folded against the skull. High set ears are a fault.

Broad and moderately rounded between the ears, gradually narrowing and flattening on top as it approaches the eyes, rounding off to cheeks. There is a slight furrow between the eyes. The topline of the skull and the topline of the muzzle show a slight break downward from a straight line as they join. Stop: Shallow.

Large and bulky in proportion to the size of the skull, diminishing slightly in width and depth from junction with the skull to the nose.

In all coat colors, except reds, the nose, lips, and eye rim pigmentation is black. Brown is permitted in red dogs. The lighter streaked « snow nose » is acceptable. Lips must be close fitting. Jaws/Teeth: Broad with large teeth. The incisors meet with a scissor bite. Overshot or undershot is a fault. Cheeks are moderately flat.

The neck is strong and moderately arched. The body is compactly built but not short coupled. The body carries no excess weight, and bone is in proportion to size.
Back: Straight and gently sloping to the hips. Loins: Hard and well muscled. A long loin that may weaken the back is a fault. Chest: Well developed.
The tail is moderately set; follows the line of the spine at the base. Carried over the back when not working. It is not a snap tail or curled tight against the back, nor is it short furred like a fox brush. The Malamute tail is well furred and has the appearance of a waving plume.

Of the « snowshoe » type, tight and deep, with well-cushioned pads, giving a firm, compact appearance. The feet are large, toes tight fitting and well arched. There is a protective growth of hair between the toes. The pads are thick and tough; toenails short and strong.

General appearance: The rear legs are broad. When viewed from the rear, the legs stand and move true in line with the movement of the front legs, not too close or too wide.
Dewclaws on the rear legs are undesirable and should be removed shortly after puppies are whelped.
Thighs: Heavily muscled.
Stifles: Moderately bent.
Hock joints: Moderately bent and well let down.

The Malamute has a thick, coarse guard coat, never long and soft. The undercoat is dense, from one to two inches in depth, oily and woolly. The coarse guard coat varies in length, as does the undercoat. The coat is relatively short to medium along the sides of the body, with the length of the coat increasing around the shoulders and neck, down the back, over the croup and in the breeching and plume. Malamutes usually have a shorter and less dense coat during the summer months. The Malamute is shown naturally. Trimming is not acceptable except to provide a clean-cut appearance of feet.

The usual colors range from light grey through intermediate shadings to black, sable, and shading of sable to red.
Color combinations are acceptable in undercoats, points and trimmings. The only solid color allowable is all white. White is always the predominant color on underbody, parts of legs, feet, and part of face markings. A white blaze on the forehead and/or collar or a spot on the nape is attractive and acceptable. The Malamute is mantled, and broken colors extending over the body or uneven splashing are undesirable.

The gait of the Malamute is steady, balanced and powerful. He is agile for his size and build. When viewed from the side, the hindquarters exhibit strong rear drive that is transmitted through a well-muscled loin to forequarters. The forequarters receive the drive from the rear with a smooth reaching stride. When viewed from the front or from the rear, the legs move true in line, not too close or too wide. At a fast trot, the feet will converge toward the centerline of the body. A stilted gait, or any gait that is not completely efficient and tireless is to be penalized.

The Alaskan Malamute is an affectionate, friendly dog, not a « one-man » dog. He is a loyal, devoted companion, playful in invitation, but generally impressive by his dignity after maturity.

This website uses cookies to improve your experience while you navigate through the website. Out of these, the cookies that are categorized as necessary are stored on your browser as they are essential for the working of basic functionalities of the website. We also use third-party cookies that help us analyze and understand how you use this website. These cookies will be stored in your browser only with your consent. You also have the option to opt-out of these cookies. But opting out of some of these cookies may affect your browsing experience.
Necessary Always Enabled
Necessary cookies are absolutely essential for the website to function properly. This category only includes cookies that ensures basic functionalities and security features of the website. These cookies do not store any personal information.
Non-necessary
Any cookies that may not be particularly necessary for the website to function and is used specifically to collect user personal data via analytics, ads, other embedded contents are termed as non-necessary cookies. It is mandatory to procure user consent prior to running these cookies on your website.
SAVE & ACCEPT